For several years I’ve trained in a fighting system used by the Israeli army: Krav Maga. International military, security, and law enforcement agencies employ krav maga.  This past Saturday I spent a tough 5 1/2 hours being tested in this street fighting defense method, including being assaulted by several attackers at once, and I thought you might be interested in what one person put out on the internet:

Frank Colucci: I would like you to meet Mr. Al Dragon (in yellow). Al was one of the students who took the 6 hour orange belt test yesterday…a grueling test by even the most conditioned person’s standards. Al didn’t skip a beat despite multiple rounds of full contact one-on-one sparring; two-on-one sparring and four-on-one sparring starting from his back on the ground. And now for the inspirational part….Al is 75 years old….That is correct, 75. So the next time that you are telling yourself that you can’t do this or you’re too old for that, remember this story…..And a big salute to Al, a great Kravist and a great man…..w/ Israeli Maga — with Albert Dragon.

[For Comments on this, click above on  Frank Colucci, click on Photos and on the same photo as seen below.] 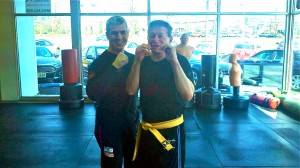